An aerotow very rarely gets interrupted, and rope break during aerotow almost never occurs. But we must prepare for everything. The procedures for an interrupted aerotow are different from a winch cable break. After all, the climb rate during an aerotow is much lower than it is during a winch launch. The most critical point for an aerotow interruption lies further down the airfield or beyond, at a much lower height above the ground.

In all these cases you must release immediately!

Always take a few seconds to weigh your options after an interrupted aerotow. There may be off-airfield landing options, which can be safely reached with only a few course alterations from a low altitude. Unless it is absolutely necessary, do not attempt to turn back to the airfield at a low altitude! If you have sufficient height to reach the airfield, your priority is to make a safe landing, not to fly the prescribed circuit. If time permits, announce your intentions by radio. Keep in mind that a modern glider can fly several miles from an altitude of only 300ft.

If the towrope breaks, or the towplane pilot releases unexpectedly, what do you do next? Even though dragging the rope back to the airfield might seem the best option, in fact it isn’t. The rope might hit the glider or wrap around it. That is dangerous and for that reason you should release the rope (2x) as soon as you know that this is safe for persons, animals and traffic below.

AEROTOW SIGNALS
Usually you are able to communicate with the towplane’s pilot by radio. If this is for some reason impossible, you can still communicate via flight control inputs. 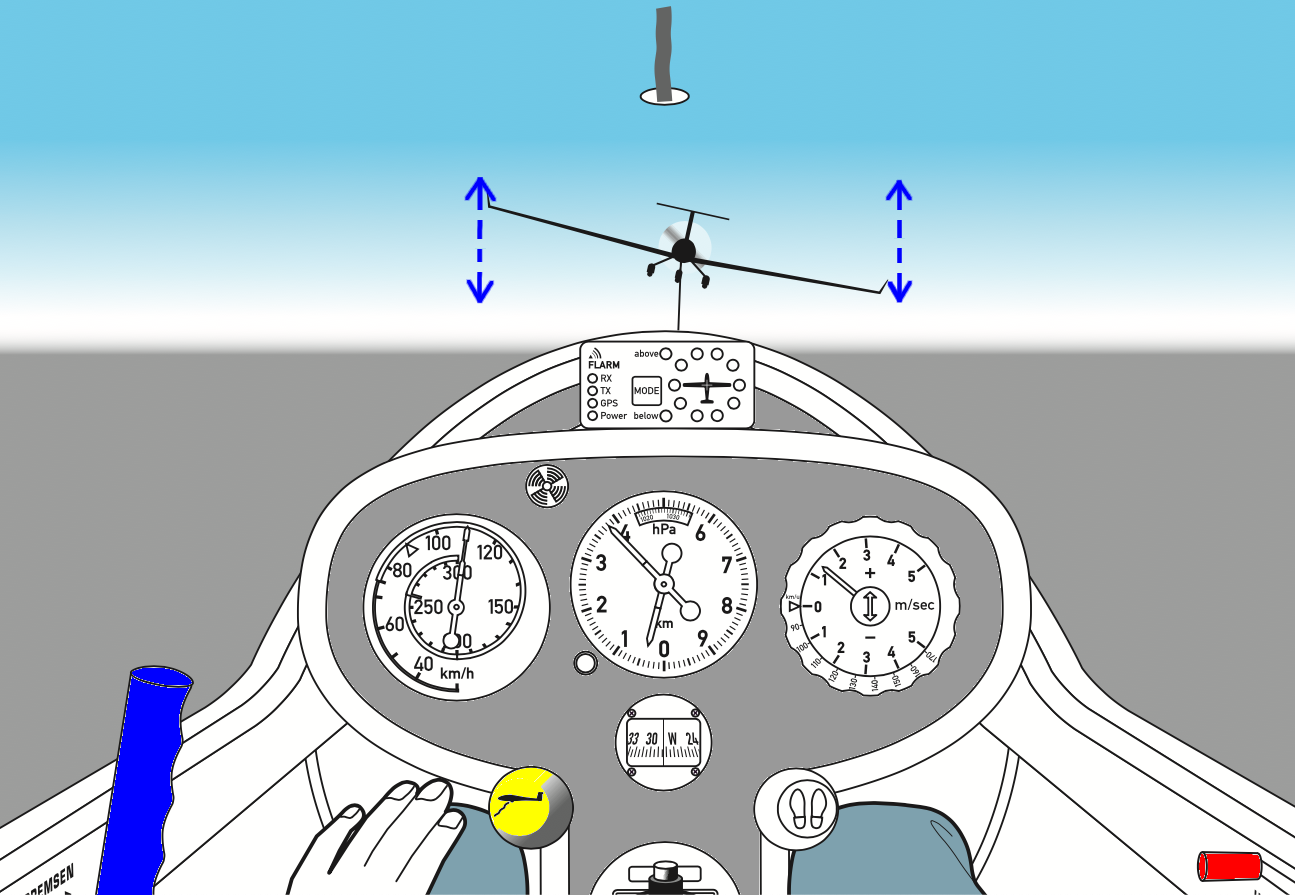 1.) As a signal that you must release immediately, the towplane will rock its wings (rolls around the longitudinal axis). Release immediately (2x) and check if the towrope has released. Now initiate a climbing right turn. 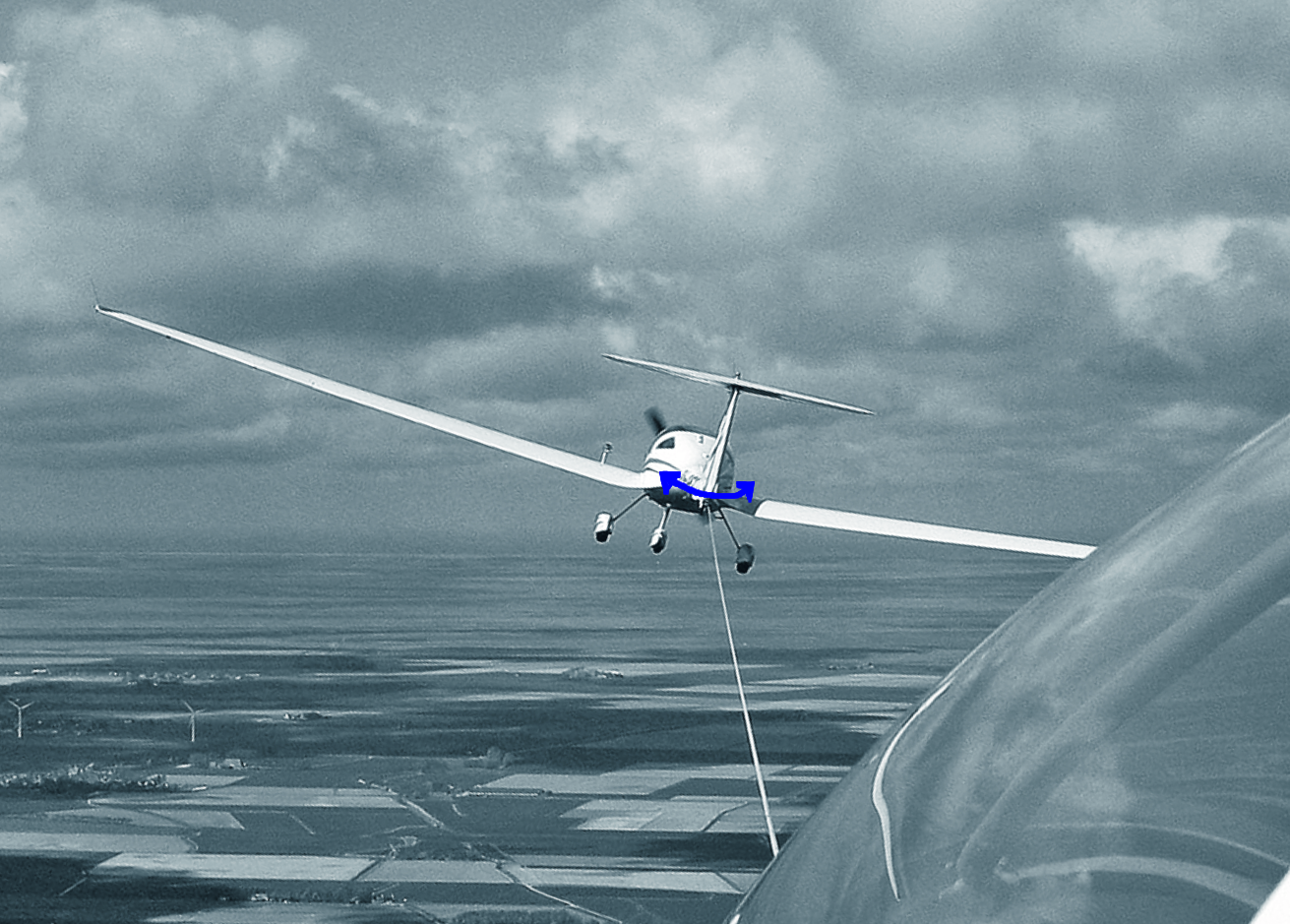 2). To indicate that the airbrakes of the gliders are out of the locked position, the towplane clearly waggles with the rudder (yawing around the vertical axis). Check the position of the airbrakes lever and lock the airbrakes if necessary.

3). In the very unlikely event that the glider is unable to release the towrope and communication by radio is also not possible: fly slightly to the left, so the towplane’s pilot can see you in their rear-view mirror and rock your wings (rolling motion around the longitudinal axis). Left wing down first to stay visible, then right. You may need some airbrakes to prevent the rope from becoming slack. 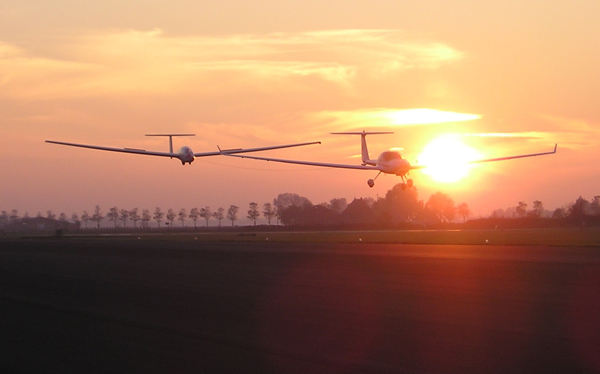 Landings on tow are possible. During descend you will need some airbrakes to keep the tow rope tight.