In this lesson, we will practice unusual attitudes, spins and spiral dives. Practising unexpected situations serves multiple purposes. You will learn to recognize the symptoms of unusual flying modes quickly, prevent a panic response by practising recovery until it becomes second nature, and recover to a normal flight condition at an early stage, with minimal height loss. But most importantly, practising recovery from unusual attitudes, spins and spiral dives will also prevent these from happening to you. Because you will know the symptoms inside out, you can end these unusual flight modes almost instinctively.

Safety precautions
Your instructor will guide you through the learning process of how to initiate a spiral dive or a spin and how to recover from either of them. Some training gliders are very good-natured and it can be difficult to make them spin. The initiation of a spin depends on many factors such as the type of glider, the loading, the position of the centre of gravity and the weather conditions. There are some safety precautions that you must take, both inside and outside the glider, before doing the exercises: set the trim to a normal pitch attitude and perform the pre-manoeuvre checklist (see Lesson 3). Depending on the type of glider, a complete turn while spinning results in a height loss of at least 200-300ft. So you need sufficient height above the ground to do one of the exercises and make it back to the airfield afterwards. Your instructor will probably bring the glider in a spin before handing the controls to you for the recovery. But we’ll start with the spiral dive. 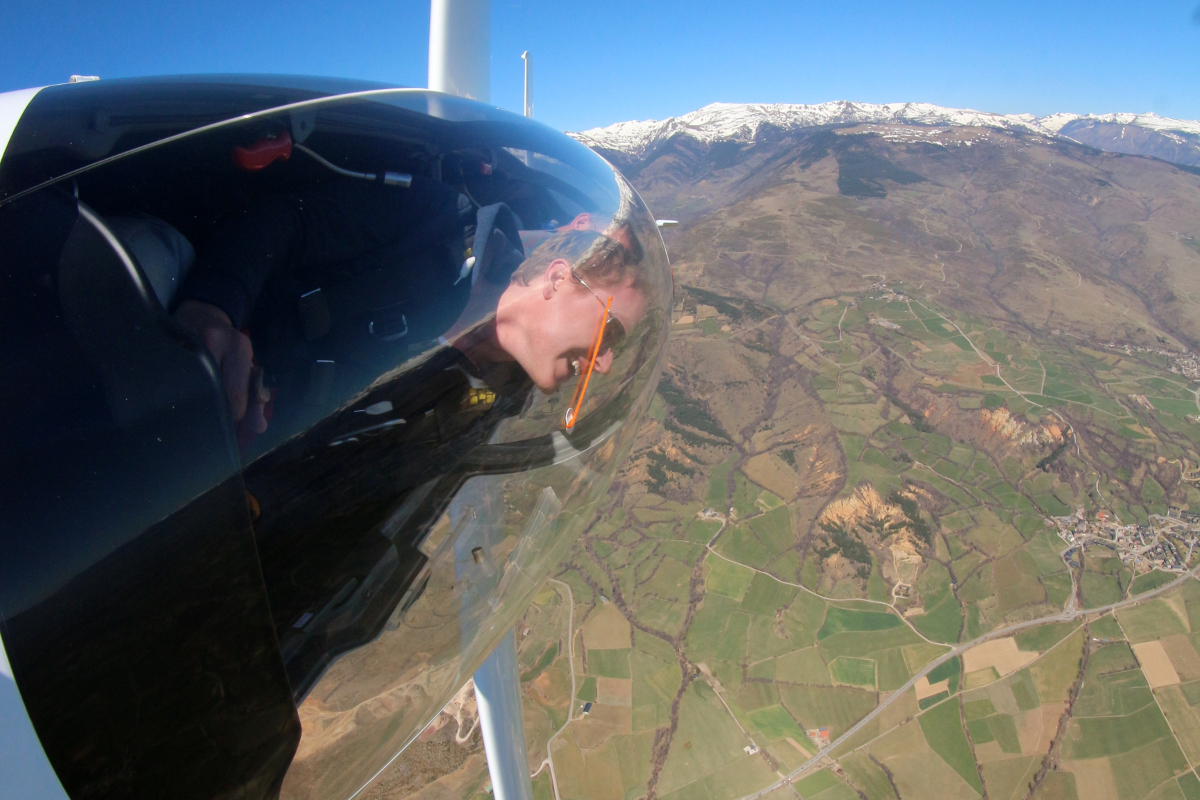 EXERCISE 1: SPIRAL DIVE
A spiral dive is a very steep turn during which you can still control the glider completely. It is very different from a stall or spin: the wings are not stalled, the angle of attack is low, and the airspeed is high. You can get caught up in a spiral dive if you pull the stick too late or not at all to maintain your pitch attitude when going into a turn. If you don’t pull the stick, the pitch attitude will drop and the airspeed increases. You will notice that you can no longer slow down by pulling the stick and the glider will start describing a strongly inclined – ever narrowing – downwards trajectory. This is a spiral dive. If you keep pulling the stick backwards, the circle gets smaller and smaller, the airspeed increases and the G-forces increase as well. Even though it might feel uncomfortable and scary at first, a spiral dive at sufficient height is not dangerous and can be ended quite easily. It becomes more critical if a spiral dive develops from slow flight or a wing drop in which the airflow has restored quickly but the steep bank angle remains. If you do not immediately reduce the bank angle, the transition into a spiral dive can be made surprisingly quickly. You may exceed the operating limits if you do not recover in time from such a spiral dive.

How to recognize a spiral dive: 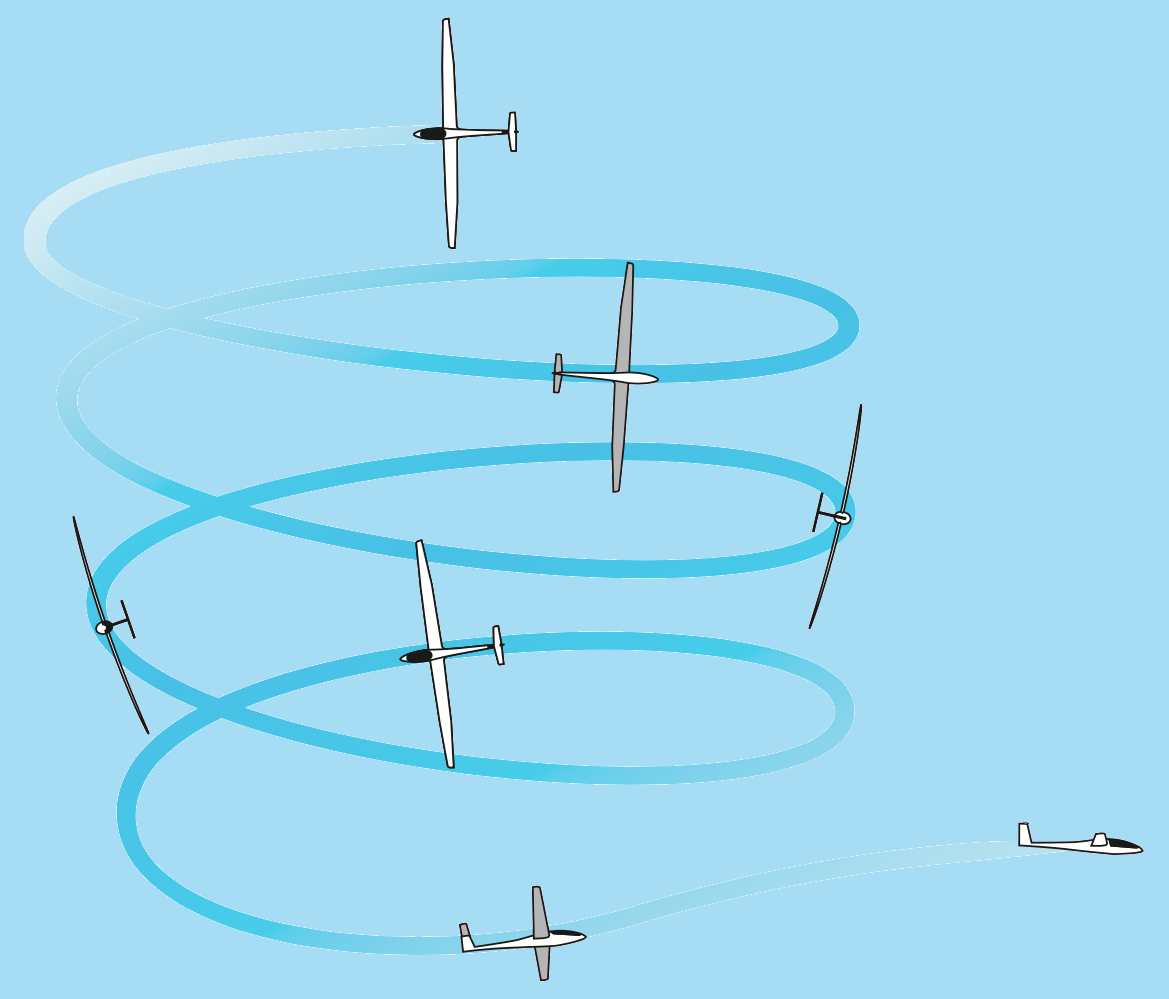 RECOVERY FROM A SPIRAL DIVE
To stop a spiral dive:

EXERCISE 2: SPIN
A spin develops if one of the glider’s wings exceeds the critical angle of attack and stalls. The stalled wing and the nose of the glider both drop and the glider starts to rotate around its longitudinal axis like a corkscrew. You lose a lot of height very quickly. If you spin the glider for the first time, you may well start feeling queasy and disorientated. Practise spinning regularly: it will help you understand what is happening and what you need to do to return to normal flight. This will replace the uncomfortable feeling. 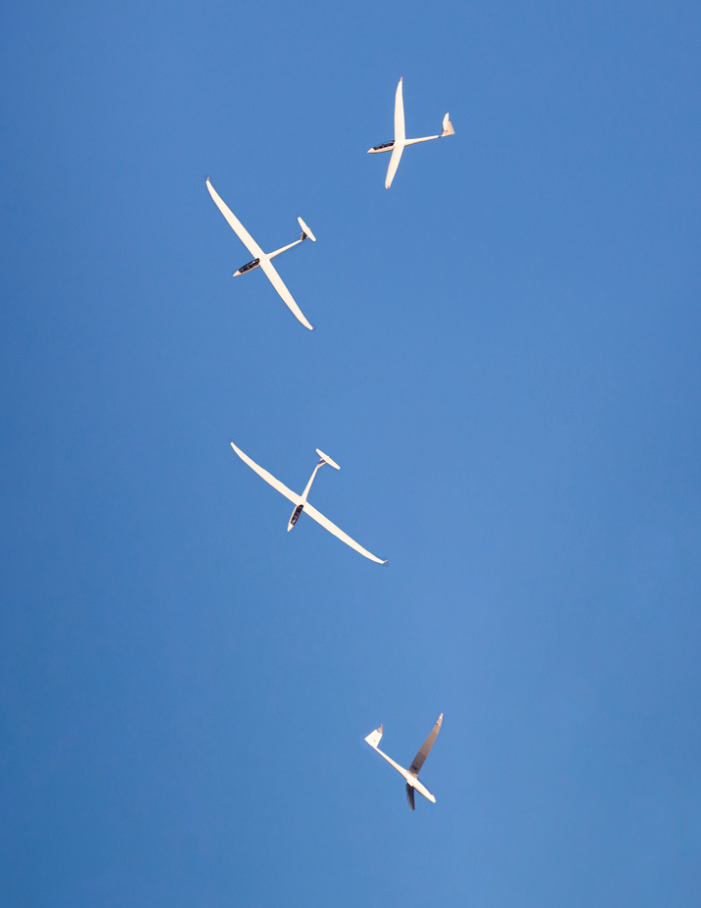 A spin can occur if you fly too slowly (1) and a stall is imminent. When a disturbance (a gust, turbulence, a thermal, a rudder deflection or various of these factors together) causes a yawing or a turning movement (2), this may lead to a spin. As we’ve said before, some training gliders are hard to get into a spin and they will recover quickly and automatically by neutralizing the flight controls. The situation can be more dangerous if you fly too slow in one of the last turns of the circuit, and (probably out of fear for the ground) make a too small bank angle with too much rudder input. 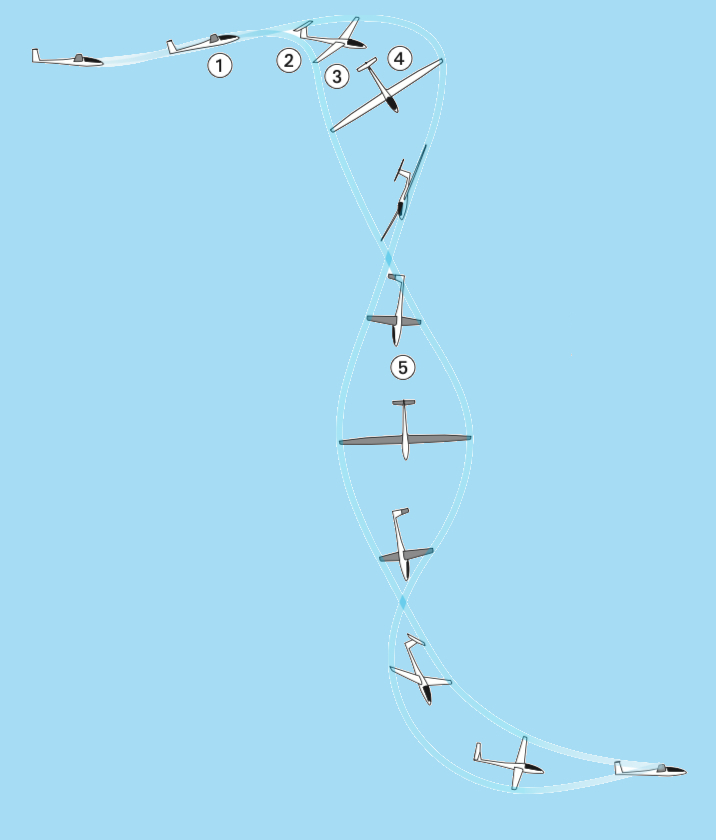 In a fully developed spin, the inner wing remains stalled (3), but there is still sufficient airflow on the outer wing (4) which creates a continuous rotary movement or autorotation (5). The rudder is still effective in a spin and can be used for recovery.

SPIN RECOVERY
Different gliders have different spin characteristics. To recover from a spin, you will need to use the method described in the aircraft flight manual. The standard-recovery as described below is effective for most gliders. Use your rudder to stop the rotation, do not use the ailerons. Even though you might be inclined to use the ailerons to get the wings level again, that would have the opposite effect and make the stall worse. It would increase the angle of attack further on the already stalled wing.

Standard spin recovery method:
1.   Apply full opposite rudder
2.   Centralize the ailerons (control stick in ‘neutral’)
3.   Push the stick forward until the rotation stops
4.   As soon as the rotation stops: rudder neutral - gently intercept the dive by pulling the stick (gently!) to increase the pitch attitude and lose the excess airspeed.

Carry out this recovery method consciously; a very common mistake is to not push the stick forward sufficiently. The nose of the glider is already pointing down, but to decrease the angle of attack you still need to push the stick forward. Also, after the rotation has stopped; do not pull out of the dive too abruptly or too hard to avoid a “secondary stall”. Instead, pull the stick gently.

A spin at low altitude is dangerous. You should do everything you can to avoid a spin when flying low. If a spin does occur; take immediate action and execute the recovery actions carefully. Do not wait!

To avoid a spin at low altitude:

EXERCISE 3: UNUSUAL ATTITUDES
“Unusual attitudes” is a popular term in powered aircraft. It describes a state in which either the pitch attitude or the bank angle, or both of them, are excessive. In gliding there are several situations where we might end up in an unusual attitude; for example after a cable break or just after recovering from a spin or spiral dive. There are two methods to recover from an unusual attitude.

CONCLUSION
The main differences between a spin and a spiral dive are that in a spin the g-forces are not high and the ailerons are ineffective, whereas in a spiral dive the g-forces are high and the flight controls work normally. This makes it easier to fly the glider out of a spiral dive. However, with sufficient practice, all recovery methods described above will start to feel normal. You will find that you need less time to ‘think’ and gain more time to act fast, should you end up in one of these situations. But most likely, recognising the symptoms early will reduce the number of times you need to recover from unusual flight modes.